Some casting news has come out today for the upcoming Arrow/Flash team-up spinoff series, as Deadline is reporting that actress Ciara Renée has been cast as Kendra Saunders, better known as Hawkgirl! 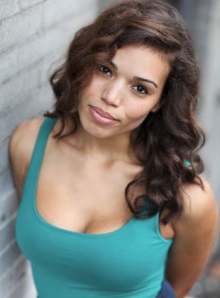 According to Deadline, Ciara Renée is a Broadway actress, who just recently made her TV debut on “Law & Order: SVU” this past fall. As far as how Hawkgirl will be portrayed on the upcoming series, here is how Deadline describes her character:

In the new series, Saunders is a young woman who is just beginning to learn that she has been repeatedly reincarnated over the centuries. When provoked, her ancient warrior persona manifests itself, along with wings that grow out of her back, earning her the moniker Hawkgirl.

In the original report for the show, it was said that three DC characters who have never appeared on TV before will be apart of this new series, but as Deadline points out, they say Hawkgirl is not one of those characters, as she has appeared in “Smallville,” as well as being a major character in the “Justice League” animated series.

This series is definitely getting more intriguing the more we information we get about it, so stay tuned as we’re sure to learn more about it in the coming months!