After what was a great bounce back season for the series, the complete fifth season of “Arrow” is coming home to Blu-ray on September 19th, 2017!

Here is the official press release for Arrow: The Complete Fifth Season, which includes all the special features details:

Contains All Action-Packed Episodes from the Fifth Season,
Plus New Featurettes, the 2016 Comic-Con Panel, and More! 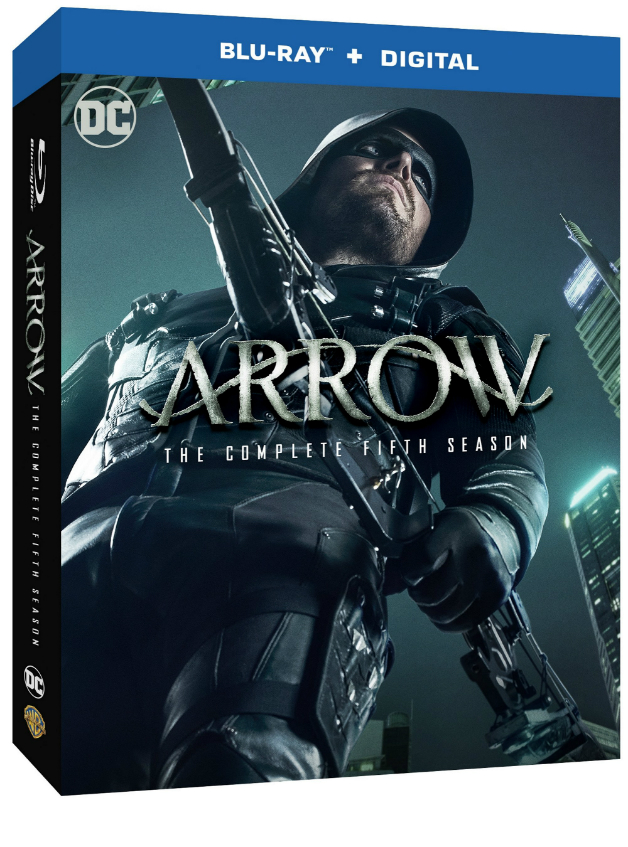 BURBANK, CA (June 06, 2017) – Just in time for Arrow’s sixth season on The CW, viewers can catch up with the thrilling series as Warner Bros. Home Entertainment releases Arrow: The Complete Fifth Season on Blu-rayTM and DVD on September 19, 2017. Averaging 3 million viewers weekly for each original episode, Arrow is the #2 series on The CW season to-date amongst Adults 18-34, behind only The Flash.* The release contains all 23 exhilarating episodes from the fifth season, the show’s 2016 Comic-Con Panel, never-before-seen featurettes, and much more. Arrow: The Complete Fifth Season is priced to own at $49.99 SRP for the DVD and $54.97 SRP for the Blu-ray which includes a Digital Copy. Arrow: The Complete Fifth Season is also available to own on Digital HD via purchase from digital retailers.

In Season Five, newly appointed Mayor Oliver Queen finds himself challenged as he fights on two fronts for the future of Star City. With his right hand, John Diggle, back in the military and his sister Thea adamant about hanging up her vigilante hood as Speedy, Team Green Arrow is down to just Oliver and Felicity – but they’re no longer the only vigilantes in town. Green Arrow’s public defeat of Damien Darhk at the end of Season Four has inspired a new crop of masked heroes to step up and defend the city, though their painful inexperience makes them obstacles rather than allies in the field. The arrival of a deadly new adversary will force Oliver to confront questions about his own legacy, both as mayor and as the Green Arrow.

“After five strong seasons, Arrow remains one of the most talked-about shows on the air,” said Rosemary Markson, WBHE Senior Vice President, Television Marketing. “The loyal fan base will enjoy the special features, in addition to the 23 gripping episodes following new challenges and new characters.”

With Blu-ray’s unsurpassed picture and sound, Arrow: The Complete Fifth Season Blu-ray release will include 1080p Full HD Video with DTS-HD Master Audio for English 5.1. The 4-disc Blu-ray will feature a high-definition Blu-ray and a Digital Copy of all 23 episodes from Season Five.