The description for the seventeenth episode of “Arrow” titled “Kapiushon” has now been released, where Prometheus continues his assault against Oliver, and in the flashbacks we’ll see more of Oliver turning into the violent vigilante that we meet in season one.

You can check out the official description for “Kapiushon” below:

“Kapiushon” is scheduled to air on Wednesday, March 22nd. 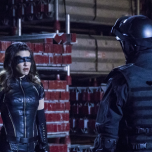 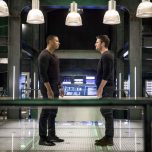