The CW has released a clip from tonight’s big new episode of “Arrow” titled “Eleven-Fifty-Nine,” where we see Andy Diggle confide in his brother about Malcolm Merlyn’s attempts to recruit him back to HIVE.

Be sure not to miss “Eleven-Fifty-Nine” when it airs later tonight, at 8/7c. 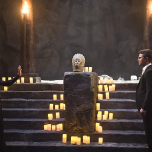