While we’re all anxiously waiting for “Arrow” to return in two weeks with the episode “Left Behind,” The CW has already released the official description for the episode to follow “Left Behind” the week after! The episode is titled “Midnight City,” and sounds like all the characters will have a lot to deal with in this one. You can check out the description below, but there are some minor spoilers in there:

Arsenal (Colton Haynes) and Diggle (David Ramsey) confront Laurel (Katie Cassidy) about trying to step into her sister’s shoes and warn her to stop before she gets herself killed. However, when Brick (guest star Vinnie Jones) kidnaps the city’s Aldermen and threatens to kill them all unless the police evacuate The Glades, it’s all suits on deck. Meanwhile, Ray (Brandon Routh) steps in to help Lance (Paul Blackthorne) and the police force fight Brick, showing Felicity (Emily Bett Rickards) a new side of her boss. Malcom (John Barrowman) tells Thea (Willa Holland) that Ra’s al Ghul (Matt Nable) is after him and his family and they must leave town immediately. Nick Copus directed the episode written by Wendy Mericle & Ben Sokolowski. (#311).

“Midnight City” is scheduled to air on Wednesday, January 28th. 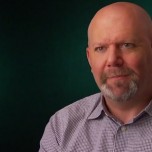